[vc_row][vc_column][vc_column_text]In the development of materials, after the innovation of Mark V and Sriver Fx the first Revolution was speed gluing. It was the first time when the glue had, finally a role in the performance of the game.

Speed gluing, discovered and used by Europeans players starting with 1978 (by Tibor Klampar), stopped the Chinese team domination for years, until they adapted same way of gluing.

The second revolution was started by the ITTF decision to ban the use of speed glue on 1-st of September 2008. This decision put rubber manufacturers to work on the technology of pre tensioned rubbers (started in 1991) and improve the materials in order to achieve the speed glue performance without using speed glue. In this period importance of the glue was not significant and manufacturers and dealers just considered that the glue has to glue and that should be all.

After banning of speed glue in 2008 no due importance was given to this interface element – the glue – which is making the connection between two different materials with so different elastic characteristics.

It was considered that the function is to glue, stick elements – blade and rubbers together and that’s it. No attention for the mechanical characteristics, influence on quality of playing, for the damaged blades and rubbers, for the unbelievable effort to clean the racket and not paying attention on importance of the glue. Many studies were carried out but nobody paid attention to them and no one filtered the conclusions.

The glue is really very important active part of your racket being the element that really makes the difference.

That’s why by creating REvolution No. 3 table tennis glue we want to give to glue the right importance that is having in improving the performance of the game.

Te real truth and secret is that not only tensioning of rubbers (chemically or mechanically) is adding performance to your racket but the quality, thickness and elasticity of the glue that is designed to be an active interface between blade and rubbers .

Understanding physics and concept of the real role of glue and adapting the product to these goals, that is making the real difference between REvolution No.3 and all other glues existing on the market.

Designed to last, to maintain the elastic properties for the whole period of use (even years), easy to use and reuse, self-leveling effect, easy to control the thickness, proper adherence to peel off for not damaging rubbers and blade, tested and quality controlled for years REvolution No.3 is a new standard for the table tennis glue, a real added value for your racket.

Power Up Your Racket With REvolution No.3!

Four steps of rubber development have had more impact on the way of playing table tennis than others:

Energy transferred through an elastic sponge and top sheet.

The duration of the time when ball meets sponge in play is almost 1/1000 second, and the spin is up to 10,000 rotations/minute.

It is estimated that 90 per cent of the energy created, reacts when impact is made with the ball.

Speed gluing started in the 1970’s, its invention being attributed to the Hungarian Tibor Klampar. It is said that this ingenious player’s partners were astonished by the sound his bat made during training and, using espionage-like techniques, discovered that before every training session he secretly applied his rubber to the bat a fresh, gluing it over again. Since that time the practice of speed gluing has spread widely. These days when children are being coached, the question arises as to whether they should start to play using speed glue, or whether they should first learn the basics of the technique. The reason for this radical change in our sport lies in the special sound of a “speed glued” bat and in the ceremonial aura surrounding speed gluing. Opponents of speed gluing complain about the odor pollution in the changing rooms and the risk to health. The subject is a highly emotional one.

The ITTF’s Board of Directors has ruled that from September 2007 the use of organic solvents to attach the rubber to the bat will be banned. The emotion that is characteristic of speed gluing has naturally taken over the discussion about this decision. It was for this reason that the authors of this report set themselves the task of assembling only such aspects of the debate as are based on fact. Facts and data have been gathered from various groups involved with speed gluing. This information

should help the decision-making body to reach a conclusion about speed gluing that is good for the future of the sport of table tennis. The authors have endeavored to refrain from any value judgments and to report only factual information.

What causes the speed gluing effect in table tennis rubbers?

The organic solvents alone are responsible for the speed-enhancing and spin enhancing effects of speed gluing. The natural rubber/resin component is neutral in terms of its effect on the rubber.

The speed gluing effect could therefore also be achieved purely through solvents, which is the case in practice to some extent already.

When speed gluing is carried out, some of the organic solvents evaporate into the air and some enter the rubber (quantitative analyses of this are shown below). This causes a change in the physical characteristics of the rubber. In practical terms, it causes the ball to rebound from the bat during play with greater speed and more spin. Since the effect does not last long, the procedure has to be repeated at regular intervals.[/vc_column_text][/vc_column][/vc_row][vc_row][vc_column]

Tibor Klampar had noticed that a freshly glued bat was faster in play than the same bat one week later. For this reason, he tried to repeat the gluing process. It is no surprise that the performance-enhancing effect of the organic solvents is dependent on the quantity used. In practice, players know this: the more you glue, the faster the bat becomes. It is also a well-known fact that the effect does not continue indefinitely and starts to decrease at a certain point. We have investigated these assumptions scientifically and conducted the following experiment. The glue quantities were measured using a laboratory scale…

But shortly, no one until now gave the right importance to the elastic remaining film and its properties related to thicness and elasticity modulus .
That’s why REvolution No.3 glue it is really different !

For more videos, go to the Instructions, Videos & Tips section.

30 seconds to change your opinion about importance of table tennis glue! 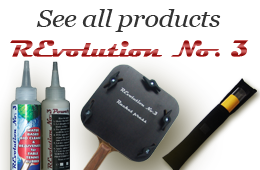 For information and support, please contact us at: info@ttrevolution.com

We respect the intellectual property rights of others and expect the users of the REvolution no. 3 products to do the same.

For more videos, go to the Instruction&Videos&Tips section from top menu.